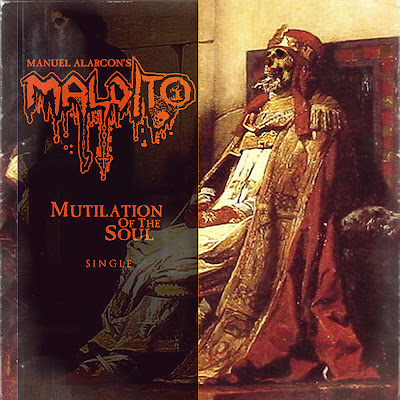 Bassist Manuel Alarcon have released is new side project called MALDITO for free download via Digmetalworld Records in North America. This release includes one original track  called "Mutilation of the Soul" and the Sepultura's cover "Territory".

You can download this mini album at this location
(http://music.digmetalworld.com/album/mutilation-of-the-soul).

The solo project is a Death metal band of old school sound, says Manuel Alarcon:
“MALDITO is a compilation of old death metal songs written years ago, some recorded years  ago as well, remixed but trying to catch the essence from old and raw death metal sound”. Maldito features the collaboration of Paulo Becerra on guitars (Naioth) and Cristian González (INFERIS) on Drum programming. The first promo single is called “Mutilation of the soul”

The track list is:
1. Mutilation of the Soul
2. Territory (cover Sepultura)

For more information about this release at its Facebook page
(https://www.facebook.com/MalditoOfficial).